Effect of Pulsed Electromagnetic Field Therapy on Prostate Volume and Vascularity in the Treatment of Benign Prostatic Hyperplasia: A Pilot Study in a Canine Model

Benign prostatic hyperplasia (BPH) is a result of urogenital aging. Recent studies suggest that an age-related impairment of the blood supply to the lower urinary tract plays a role in the development of BPH and thus may be a contributing factor in the pathogenesis of BPH. The canine prostate is a model for understanding abnormal growth of the human prostate gland. We studied the efficacy of pulsed electromagnetic field therapy (PEMF) in dogs to modify prostate blood flow and evaluated its effect on BPH.

PEMF (5 min, twice a day for 3 weeks) was performed on 20 dogs affected by BPH. Prostatic volume, Doppler assessment by ultrasonography, libido, semen quality, testosterone levels, and seminal plasma volume, composition and pH were evaluated before and after treatment.

The 3 weeks of PEMF produced a significant reduction in prostatic volume (average 57%) without any interference with semen quality, testosterone levels or libido. Doppler parameters showed a reduction of peripheral resistances and a progressive reduction throughout the trial of the systolic peak velocity, end-diastolic velocity, mean velocity, mean, and peak gradient of the blood flow in the dorsal branch of the prostatic artery. The pulsatility index and the resistance index did not vary significantly over time.

The efficacy of PEMF on BPH in dogs, with no side effects, suggests the suitability of this treatment in humans and supports the hypothesis that impairment of blood supply to the lower urinary tract may be a causative factor in the development of BPH. Prostate 74:1132–1141, 2014. © 2014 The Authors. The Prostate published by Wiley Periodicals, Inc.
Keywords: BPH, prostate, electromagnetic therapy, PEMF, dog

Benign prostatic hyperplasia (BPH) is an age-related enlargement of the prostate gland and is one of the most frequent medical disorders of elderly men throughout the world [1]. BPH also has a serious public health impact. Direct and indirect annual costs related to BPH treatment are estimated to be $3.9 billion in the United States [2–4] and €858 per patient per year in Europe [5]. BPH can present with hematuria, lower urinary tract symptoms and sexual dysfunction. If untreated, BPH leads to reduced quality of life and may result in severe complications such as acute urinary retention and urinary tract infections [6,7].

Generally the main goals of therapy for BPH are to improve symptoms, improve quality of life, arrest the disease process and prevent some of the adverse outcomes associated with BPH. The goals of BPH therapy may differ, however, depending on the individual's point of view: patients focus on the quality-of-life issues and alleviation of symptoms and prefer a natural product with minimal side effects, particularly effects that impair sexual function or alter ejaculation; primary care physicians are concerned with safety of treatment used; and insurers and funders of national healthcare systems seek to minimize and defer treatment costs [8].

At the moment there are no therapies that meet all objectives. The available therapeutic options are surgical or pharmaceutical, each with pros and cons. Transurethral resection of the prostate (TURP) has been the goldstandard treatment in men with symptomatic BPH. However, the morbidity of TURP approaches 20%, and less invasive techniques being developed are reducing the need for this method [9]. Available drug therapies for BPH fall under two general categories: alpha-blockers and 5 alpha-reductase inhibitors, both of which can improve urine flow, but they do not reduce the size of the prostate, and can contribute to sexual dysfunction or hypotension as side effects.

Phytotherapies or dietary supplements (saw palmetto, pygeum africanum, etc.) are widely available and commonly used remedies, with evidence of efficacy, but may not have the quality and safety profiles of medicines regulated by the Food and Drug Administration and may have variable potency and pharmacological activity [10].

Each new therapeutic approach should not ignore BPH pathophysiology, even if not completely understood [11]. BPH is a disease with multiple etiologies, including hormone signaling, disruption of proliferation, and apoptosis dynamics, and chronic inflammation, with changes in the morphology and phenotype of the prostate stroma. Inflammation of the prostate represents a mechanism for hyperplastic changes to occur in the prostate. Both chronic and acute inflammation may lead to events that can cause proliferation within prostatic tissue through oxidative stress. Both tissue damage and oxidative stress may lead to compensatory cellular proliferation with resulting hyperplastic growth [12].

Systemic conditions such as hypercholesterolemia [13], obesity [14] and stress [15,16] may be important risk factors for BPH. Several studies suggested an association between prostatic disease and the presence of vascular disorders such as coronary heart disease [17,18] or diabetes mellitus [19,20]. Generalized or localized vascular damage may cause hypoxia. Ghafar and colleagues [1] postulated that hyperplasia in the stromal and glandular compartments of the prostate might be induced by stromal growth secondary to hypoxia, which in turn results from abnormal blood flow patterns. In a recent study using a cell-culture model of human prostatic stromal cells, the cells responded to hypoxia by up-regulating the secretion of several growth factors in vitro, which suggests that hypoxia might trigger prostatic growth [21].

These findings led our team to consider a new therapeutic option for BPH: pulsed electromagnetic field therapy (PEMF). We focused our attention on the following main concepts: (1) the prostatic vascular system is an important component of prostate growth and regulation, and the dysfunction in blood flow to the prostate gland may be involved in the process through which BPH develops and is controlled [1]; (2) inflammation represents a mechanism for hyperplastic changes to occur in the prostate [12]; and (3) PEMF has a positive effect on vascularization and hemodynamics of the prostate [22] and tissues in general [23]. Thus, reducing tissue hypoxia that results from abnormal blood flow patterns by improving oxygen delivery and reducing inflammation might be a healing measure or a preventive measure in patients with or at risk of BPH.

Nevertheless, there is some confusion about PEMF. In general, electromagnetic modalities include any modality which uses electricity and therefore generates both an electric field and a magnetic field. This includes PEMFs, microcurrent therapy (MCT) and microwave diathermy (MWD). Ultrasound is a commonly used modality in which the resultant acoustic wave is mechanical and not electromagnetic [24].

PEMF is very low frequency pulsed energy waves in the range of 1–50 Hz and is also identified as a weak non-thermal electromagnetic field [26] generally used to expedite recovery [24] or to reduce post surgical side effects [27,28].

Electromagnetic therapies are based on the application of time-varying magnetic fields, usually generated at low frequencies by an alternating current passing through a coil [29]. The essential difference with static fields is that time-varying magnetic fields can generate electric fields with significant intensity inside the body, and its value may be estimated using physical laws like the Faraday's equation. Magnetostatic fields do not have an associated electric field and cannot transfer magnetic energy to moving charged particles, indicating the ineffectiveness of this treatment and explaining the absence of firm medical evidence in the scientific literature to support its use [29]. In this article, we use the term magnetotherapy or PEMF to refer to electromagnetic therapy by PEMF, where there is always an electrical field that influences the body's electrical charges.

Over the past several decades, physicians and scientists have used a rigorous scientific approach to clinical application of PEMF to treat therapeutically resistant problems, mainly in the musculoskeletal system. PEMF has been proven to be clinically safe, and it is well accepted that PEMF provides a practical non-invasive method for inducing cell and tissue modification that can correct selected pathological states. Many publications suggest that exogenous electromagnetic fields can have profound effects on a large number of biological processes [30–33].

PEMF is a relatively widespread method used in several medical disciplines such as orthopedics, neurology, and urology [34]. The mechanism for the advantageous action of the pulsed magnetic field on the living organism is not quite clear yet, but clinical investigations have revealed a favorable anti-inflammatory, angioedematous, and analgesic therapeutic effect [35]. A number of clinical studies suggest that magnetic stimulation can accelerate the healing process [27,32,33,36]. Its use on the prostate gland led to a decrease in the number of postoperative complications after TURP [28] and was found to stimulate prostate glands and improve circulation [23], having a positive effect on vascularization and hemodynamics of the prostate [22].

The objective of the current study was to evaluate the efficacy of magnetotherapy for the treatment of BPH as a conservative therapy with high compliance, no drug interactions and low cost. As a preliminary study, the dog was used as experimental model. The dog is considered a reliable animal model for the study of human BPH [11,37–39] and few differences are noticeable between the two species in terms of prostatic anatomy [40], histology [41,42], physiology, BPH pathogenesis [43–45], diagnosis [46] and symptoms.

The most common clinical sign of BPH in dogs is bloody fluid dripping from the penis unassociated with urination. Although urethral obstructive disease occurs in men with BPH, it is extremely rare in dogs [47]. While blood is frequently observed in semen samples and the volume of ejaculate is decreased [43], total sperm count and fertility are not affected by BPH in dogs. However, most cases of BPH in dogs do not evidence clinical signs despite being viewable on ultrasonography as prostatic volume enlargement. It is only when the prostate becomes large enough to compress the colon and interferes with defecation that serious effects result and rectal tenesmus and constipation may be present [48]. Despite the differences, there are sufficient similarities between the two species to regard the canine condition as a useful model for comparison to the human disease [38,43]. In this study, we evaluated the effect of PEMF on prostate volume, semen quality, testosterone and hemodynamic changes by ultrasonography.

For the study, 20 mature, healthy male dogs 8 to 14 years of age (mean = 9.5 years, SD = 1.5 years), weighing 13–39 kilograms (kg) (mean = 23.8 kg, SD = 8.8 kg) were selected. No symptoms of prostatic disease were detected in experimental dogs apart from a uniform prostatic enlargement at rectal exploration and an increase of prostatic volume at ultrasonography that suggested diagnosis of simple BPH [43]. Cytological evaluation by fine-needle aspiration biopsy of the prostate confirmed the benign nature of the prostate volume enlargement [49]. Urinalysis and an andrological examination (including ultrasonography exams, semen quality, and prostatic fluid evaluation) were also performed. The selected dogs were all owned and not subjected to changes in habits during the study.

Clinical exams were performed at the Faculty of Veterinary Medicine, University of Bari Aldo Moro. Investigations were conducted with the owners' consent in accordance with the Principles for the Care and Use of Research Animals, promulgated by the European Community.

At day 0 (T0), the prostate gland was scanned by transabdominal ultrasonography and volume was calculated. Prostatic hemodynamic patterns were checked by Doppler. Semen collection and blood samples were performed to check semen quality, seminal plasma volume, and serum testosterone concentration. Dogs were then treated two times a day (every 12 hours) with magnetotherapy for 5 min each session for three weeks. At day 7, 14, and 21 (T1, T2, T3) the prostatic volume and hemodynamic changes were checked by ultrasonography. At day 0 and 21 (T0, T3), semen was evaluated for quality (total sperm concentration, motility), seminal plasma contents, volume and pH; blood samples were evaluated for testosterone content. Throughout the trial, the dogs were under clinical observation. Magnetotherapy Magnetotherapy was performed by a physical therapy device (Magcell® Vetri, Physiomed Elektromedizin AG, Schnaittach, Germany) (Fig. 1). 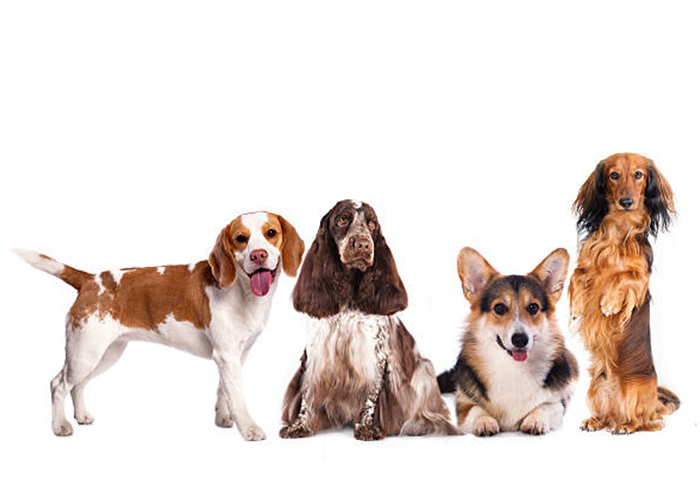